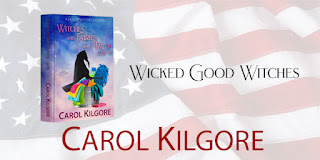 First of all, thanks to all of you who supported the launch of
Witches and Fairies and Tacos... Oh My.
You helped give it a great start.
The pace has finally slowed and I'm able to spend much more time now writing the second House Witches book. I think you'll like this one, too. And that's all I'm saying about it for a while.
While some areas of the U.S. have seen horrible flooding, here in Texas we've now been two and a half months without measurable rainfall and daily high temperatures between 95-105. Over the last couple of weeks, we've had a rainy afternoon or two, but have accumulated less than one inch of rain. We are more than twenty inches behind for the year, and for a while, we were under Stage 3 Water Restrictions because a major water main broke. Don't even think about what may be coming next. We need that box to stay securely sealed.
After one of those five-minute showers, several little green anole lizards appeared on the leaves of shrubs outside my writing window. They were licking the drops of water from the leaves. I looked over at one point and saw the biggest lizard I've ever seen in my life on the brick support for the roof of our porch with his head down and tail up. Biggest outside of large iguanas, that is. He was the same reddish-brown color that is in our multi-color brick. His skin was not smooth like the little anoles we have everywhere. I tried to guesstimate his size. His head and body were about 7-8 inches total and his tail another 8-10 inches. His body was about two inches across and his head at least one inch. Maybe he was the Godfather Anole
And finally... Do you know what you call a guppy wearing a bow tie?
Sofishticated :)
See you in September!

T. Powell Coltrin said…
We are under drought conditions and 100 degree temps on a daily basis. :( I make sure that I fill the bird bath and a huge bowl of water for all the dogs and cats that roam in our neighborhood, just in case they don't get it at home.

Good luck on your new story!!!

Natalie Aguirre said…
Glad your book launch went well and that you're getting lots of time to write. Sorry it's so hot and dry in Texas. I've never enjoyed being there in the summer.
August 3, 2022 at 12:36 PM

Elephant's Child said…
I am so glad that your latest book got off to a good start - and even gladder that you are writing another.
I am all to familiar with heat and drought and hope that both break for you soon. Without the torrential floods that have affected much of Oz as well.
August 3, 2022 at 1:15 PM

Carol Kilgore said…
Teresa - Our grass is crispy and golden.

Alex - I don't know why I didn't think to take a photo of it. I've kicked myself a few times for that. I look every morning before it heats up and haven't seen him again. Hasn't rained any since then either.

Natalie - Last year, we had a lot of rain in the summer and never got to 100. Most days were under 95 even. This year seems brutal for everyone across the country, in one way or another.

EC- I hope the heat doesn't bring a bad hurricane this month or next.

Melissa said…
Sounds like someone's pet got loose. I'm right here with you on the weather. My outdoor thermometer reads 101*F today. It's sad when you find yourself cheering on days the high will only be 98. LOL This has to be the worst heat wave I've ever lived through. Enough, already. Gah.

cleemckenzie said…
All of the critters are suffering out here in the west. I felt terrible having to turn off one of my pond fountains because the little birds used to flock to it for water. But I'm trying to conserve water in every possible way, and with the fountain running, the evaporation is far greater than when it's still.

Keep those lizards hydrated if possible. They are amazing for gardens, and the big guy sounds quite interesting as well as thirsty.
August 3, 2022 at 6:06 PM

Carol Kilgore said…
Melissa - I walked into the backyard about 7:30 last night. It was breezy and not hot. I thought it must be about 85. It was 92. When 92 doesn't feel hot, it says something about how hot 100-105 really is. That big lizard may have been an escaped pet. It may rain again this weekend, so maybe I'll spot him again - and this time get a photo.