Once Upon a Time

Once upon a time, a little boy was born, and he was named Nicholas.

Nicholas loved playing with all the animals in the forest, for he had no brothers or sisters. One day, a friendly deer led him to a cave.

Inside, dozens of small people with large ears worked making all kinds of things. They worked and moved so fast, Nicholas had a hard time keeping up.

One of the little people ran over and stood in front of him. Nicholas crouched to be almost on eye-level. "Hi. I'm Nicholas. Who are you?"

"How come all of you are so little?"

"We're not little. We're elves. See my ears? You're the huge one because you're a human."

"This is our workshop. When something in the village breaks, we fix it. If a villager needs something, we make it. We can make anything."

"How come no one knows about you?"

"I want to be magic," Nicholas said. "Can you make me magic?"

The elf thought for a few seconds while scratching his head. "I think so. We will have to surround you with magic, but that's only part of it. Most of all, you must believe magic exists."

Nicholas felt his eyes grow round. "What if I stop believing?"

A tear fell from Pete's eye. "Then it goes away. As if it never existed."

Time passed and Nick rescued a magic woman from a snowdrift.

"Oh, thank you. You're a saint. My own Saint Nick." She kissed him on the cheek.

They fell in love and got married. Nick had never been so happy as when the pastor said, "I now pronounce you Mr. and Mrs. Claus."

About this time, Nick began hearing wishes from little boys and girls around the world. He talked to Pete, who said the elves would make everything but Nick would have to deliver it all.

"I'll need a sleigh. Do you think we can get the deer to pull it?"

Pete was silent for a moment. "I'll talk to them. A few have learned to fly like birds. Those would probably be the best. We call them reindeer because they have to be tethered by their reins to keep from taking off."

When it came time for the first delivery, the snow was icy. Even the reindeer were sliding everywhere, unable to gain a foothold. Nick told everyone to just stand as still as possible and he'd be right back.

A few minutes later, he returned with a wagon filled with sand. Everyone cheered. "Sand! Sand! Sand from Nick!"

And this is the absolute 100% true story of how Nicholas Claus became first Saint Nick and later, Santa Claus. 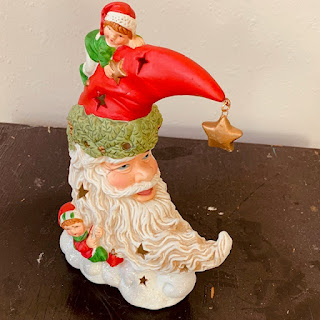 I'll be absent here in January, hoping to get a good start on a new writing project. Look for me again on Wednesday, February 3.

"And I heard him exclaim as he drove out of sight,
'Merry Christmas to all, and to all a good night!'"
Always Believe

Rachna Chhabria said…
This was such an adorable story. Merry Christmas and a Happy New Year.
December 2, 2020 at 8:10 AM

Elizabeth Spann Craig said…
Merry Christmas! Hope you have a great January full of writing. :) Loved the story!
December 2, 2020 at 10:25 AM

Natalie Aguirre said…
Great story. Have a great January. I hope you make progress on your new writing project.
December 2, 2020 at 11:02 AM

Elizabeth and Natalie:
I'm starting a new series that's been rumbling around in my head for over a year. Wish me luck!
December 2, 2020 at 3:02 PM

Lynda R Young as Elle Cardy said…
lol. Loved the story.
Have a safe and wonderful Christmas, and I'll see you in the new year.
December 2, 2020 at 5:52 PM

cleemckenzie said…
Loved reading your story! And loved finding out you're launching a new project. Here's to a new story in a new year.
December 2, 2020 at 10:43 PM

Carol Kilgore said…
Lynda - You, too!

Susan - Thanks! I think it's going to be fun.

Carol Kilgore said…
Jess - Thanks. I was unable to leave a comment on your regular blog but poked around and found you at Cottage 5.
December 17, 2020 at 11:45 AM