Here in Texas and in much of the southern tier of states, our autumn is unlike fall in most of the rest of the country. After five or more months with highs in the 90s or 100s and lows in the mid-70s at best, we get a little chilly when the thermometer dips below the 70 mark.

This guy greeted us last weekend when we pulled up at our favorite local barbeque spot: 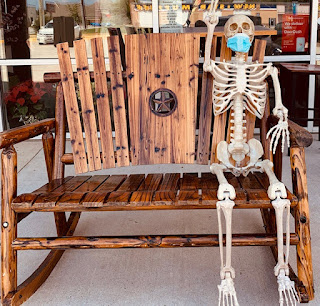 In keeping with the season, I asked some of the characters in my books what were their three favorite things to do in the fall.

Summer Newcombe, In Name Only, said she likes to put on sweats and a hoodie and take long walks on the Padre Island beach. She also likes to go into Corpus Christi for the First Friday Art Walk at the Marina, enjoy the music, and browse all the items for sale. She had to think about the third thing but finally said it's to curl up in a blanket on her patio and read on her Kindle.

Taylor Campbell, Solomon's Compass, said her favorite thing any season is to be by herself on the deck of a Coast Guard cutter in the middle of an ocean and watch the stars. In the fall, she likes to be holding something warm to drink, either coffee or apple cider. She also likes to go to the mountains when the leaves are changing and just relax.

Kat Marengo, Secrets of Honor, has traveled a lot and worked in cities around the world. In the fall, she likes to take long city walks. Her favorite cities to walk in are Boston, Paris, and New York. She also likes to window shop and stop into bistros for a glass of wine along the way.

Gracie Hofner, the Amazing Gracie Trilogy, is a Texas woman through-and-through. Her three favorite things to do in the fall are to take her Jeep to Lost Maples State Natural Area for a weekend. It's only about a two-hour drive from San Antonio and the "best place ever to see maple trees in the fall." She also likes to go to her favorite bar in La Villita in downtown San Antonio near the River Walk and people watch on Dia de Los Muertes - the Day of the Dead. And finally to challenge Nick to a chili cook-off and invite all their friends to be judges.

Since Gracie is in a trilogy, I also asked three other characters who share pages with her what their one favorite thing was.

Ariana Ayala - I like reading and drinking Mexican hot chocolate in front of the fireplace.

Roland Jackson - It rarely happens, but my favorite thing to do anytime of year is to send the kids to grandma's and stay snuggled in bed with Sabrina.

Now that you know what my characters like to do in the fall, how about you? What's your favorite thing to do when the weather cools off and the nights get longer?

I'll be back here on Wednesday, November 4. Hope to see you then!

Natalie Aguirre said…
My husband used to make us Mexican hot chocolate. I'm glad it's cooling down in Texas. I've been there in the summer visiting family, and the heat is brutal sometimes.
October 7, 2020 at 7:31 AM

Leigh Caron said…
That's cool that you know what your characters likes about autumn. I'll have to think about mine. I'm actually in San Antonio now...while my home in Akumal, Mexico is getting slammed with the second hurricane in a week.Nothing I can do and didn't know the weather would be so rough, but I have caretakers looking after my home and animals. I'm with my daughter and grandson and while I love hot days of San Antonio, I do appreciate the cooler air in the morning with my cup of coffee and writing.
October 7, 2020 at 8:33 AM

Jemi Fraser said…
Fall is my favourite! We're so lucky here in Northern Ontario - our leaves are gorgeous!!! I think Taylor and Gracie would approve :)
October 7, 2020 at 10:27 AM

Elephant's Child said…
I loathe and detest summer. When autumn comes round (and settles in) I welcome her with open arms.
October 7, 2020 at 11:54 AM

Carol Kilgore said…
Alex - Probably there are as many different recipes for Mexican hot chocolate as there are cooks. Basically it's less sweet and more chocolatey, with either semisweet or bittersweet chocolate. It also has cinnamon, vanilla, and a little ground chile or cayenne pepper. It's yummy!

Natalie - Yes! Although we're back to 90 today and there's no breeze.

Leigh - Really glad you're in SA and not Akumal! I was thinking about you this morning and hoping you were OK. I hope all will be well when you return home.

Diane - We're a long way yet from being able to open the windows, but our weather has been fabulous.

Jemi - The leaves are what I miss most about living farther north. If we have any color at all, it's spotty. Mostly our leaves turn brown and drop off. Or blow off. And that doesn't happen until at least November. A few years ago, the Bradford pear trees didn't drop their leaves until nearly the end of January and were blooming less than a month later. Even our trees gotta be Texas Tough :)

EC - I can understand. I'm sort of that way about winter, especially February.

cleemckenzie said…
I'm just so relieved to see fall this year that anything I do is going to be my favorite. However, a cup of that chocolate sounds like something that I might put up at the top of the list.
October 7, 2020 at 5:02 PM

Carol Kilgore said…
Liza - Me, too!

DMS said…
It is getting chilly here this week. Last week it was still pretty warm. When it is cooler I like to read and watch spooky things, decorate pumpkins, eat apple crisp/pie, and wear a sweater and jeans. Comfy, cozy, and tasty fall treats. :)

Carol Kilgore said…
Jess - It is winter-like for us right now since yesterday. Our winter, not yours, LOL! Until then, I was still in shorts and flip-flops. Now I'm wearing jeans, a sweater, and socks. Usually I don't break those items out until mid-November or later. Happy Halloween!
October 29, 2020 at 12:18 PM