Bird is the Word

The Ides of March
St. Patrick's Day
Shamrocks and Leprechauns
The ever-present March winds
And in Texas... bluebonnets! 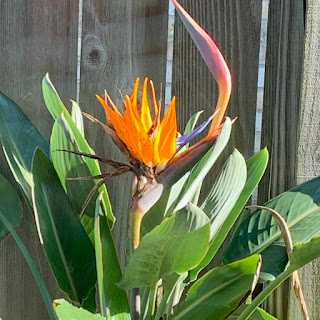 Here in our garden, we also have a blooming Bird of Paradise. Doesn't this bloom and unopened bud look like a brightly plumed tropical bird!

I shared here when the first bloom opened in late December or early January. That would be the body of this "bird." It's looked like this for about three weeks now. I hope that second bud opens soon--it looks huge.

I don't know if or when it will bloom next season. We moved its mother from Corpus Christi to San Antonio, but "Mom" was way too large to move here. So we brought her baby. Looks as if she likes it here.

February was a sad month, as our sweet dog Wrangler received his angel wings a couple of days before Valentine's Day. He would have been 15 on April 1. Although he loved us all, Wrangler was my dog more than anyone else's. When we adopted him as a new puppy, husband was traveling a lot and then had some medical issues. Wrangler and I were a team, and he was always where I was. He was my Velcro Dog, on a mission to watch over me and keep me safe from all harm. He did an amazing job and I miss him, but he's running and playing now, so all is good. 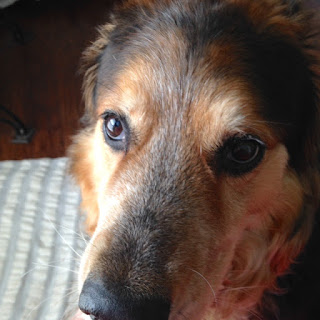 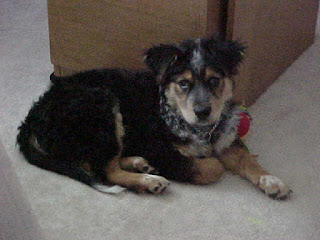 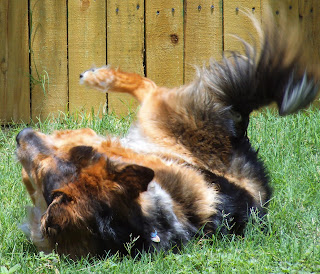 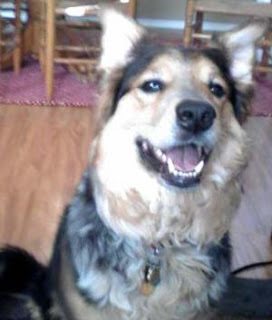 His brother, Shiner, has taken up the slack by stepping into Big Bro's shoes. He now supervises all we do and keeps us safe from wind and leaves, the UPS and Amazon drivers, and the dogs next door. 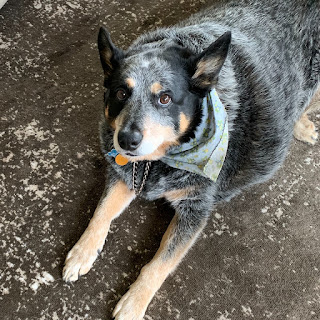 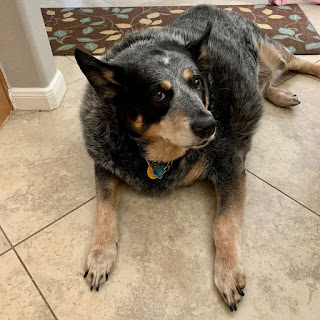 I'm happy to tell you that, knock wood, writing is going well. Gracie says hi. This is a lead-up to let you know that Bluebonnet Ballerina, the second book in the Amazing Gracie Trilogy, will be on sale from March 23-29. It's always free to read with a Kindle Unlimited subscription and it's also available in paperback. But if you want your very own Kindle edition, the last week of March will be a perfect time to snap it up. 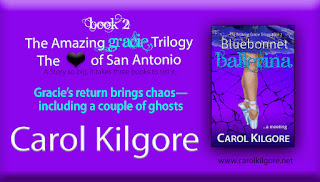 Gracie Hofner returns, and chaos reigns—including a couple of ghosts trying to save their granddaughter. But as Gracie dances from problem to problem, she’s unaware the music has been orchestrated into a murderous symphony.

When a different melody reaches Gracie’s ears from a guitar played by the new tenant living in her garage apartment, her tension vanishes. She listens unseen, cocooned in the shadows on her patio, and wonders who he’s longing for—and how it would feel for a man to crave her that much.

She can’t dwell on those thoughts, however. Problems of murder and missing prisoners abound. To say nothing of the ghosts. No one ever said being a law enforcement consultant would be easy.

I will be back here on April Fool's Day - Wednesday, April 1. See you then!

T. Powell Coltrin said…
Losing pets is just as traumatic as losing the humans in our lives. You've had good pupper angels for sure.

H.R. Sinclair said…
Hugs! and more Hugs! I'm so sorry for your loss. I'm glad to hear Shiner has stepped up and is protecting you from those mean evil leaves.

Elephant's Child said…
I am so very sorry. They wind their paws deep into our heart strings and take a piece of us with them when they leave.
Love the bird of paradise (too cold for them here) and am delighted that your writing is going well.
March 2, 2020 at 11:52 AM

Elizabeth Spann Craig said…
Oh, so sorry about Wrangler! Losing a dog is the *worst*. They're so integrated into our daily routine that every day is a reminder. Sounds like Shiner is doing a great job in Wrangler's place, though!
March 2, 2020 at 1:04 PM

Jo-Anne's Ramblings said…
The loss of a loved pet is so sad, they are not animals they are family members
March 2, 2020 at 3:59 PM

Teresa - Yes, I've been blessed. Wrangler was my special angel since the beginning.

HR - Thanks. I'm wondering if that bud is ever going to open. Shiner still misses his brother, too, some of the time.

Diane - Yes, he is! And having a ball exploring everywhere.

EC - Thanks. So true about our very souls becoming entwined.

Elizabeth - We're all adjusting to the new normal. Some days are better than others.

Jo-Anne - Exactly! A family. A pack. Love and be loved.

Natalie Aguirre said…
So sorry that you lost Wrangler. I'm glad he had a little brother. I'd definitely have to get a new dog when my sweet dog leaves me.
March 3, 2020 at 3:03 PM

Janie Junebug said…
I'm sorry about Wrangler. Our dogs work so hard to take care of us.

Jemi Fraser said…
Oh no! I'm so sorry to hear about Wrangler - glad you have Shiner to help with the necessary doggie snuggles and protection! Sending hugs!
Love the flower - we still have snow banks :P
March 4, 2020 at 10:29 AM

Carol Kilgore said…
Natalie - I will, too, after Shiner. But I hope that's not for a while. And that it's a while for you, too.

Janie - They sure do!

Liza - Our bluebonnets are gorgeous. I have yet to see a photo that truly does justice to their beauty, although some years are better than others. I think it depends on rainfall. I hope you do get to see them one spring day.

Bish Denham said…
Aww, I know what it's like to let a velcro dog go play in the Elysian Fields.

We have a few scraggly bluebonnets blooming in our back yard. Hopefully the rain we had last night and today will make our "back 40" burst into profuse bloom.
March 4, 2020 at 5:19 PM

Susan Flett Swiderski said…
I'm so sorry about Wrangler. When we lose a pet, they take a piece of our hearts with them.

Birds of paradise are so beautiful. Almost too beautiful to be real, ya know? I'm glad yours is happy in your new location.

Lynda R Young as Elle Cardy said…
Aw, I'm sorry to hear about Wrangler. My heart goes out to you.
Shiner looks almost exactly like a dog I had when I was growing up. So adorable.
March 4, 2020 at 10:42 PM

Susan - I feel the same about birds of paradise!

Lynda - Thanks. Both these dogs are/were crazy smart.

Murees Dupè said…
I am so sorry about Wrangler. My heart aches for you. It is just a horrible experience, and that terrible sense of loss is unbearable. But it's great Shiner is there for you now. Thank you for your kind words about Abby's passing. Sending you tons of hugs.
March 9, 2020 at 8:09 PM

DMS said…
Sorry to hear about Wrangler! He sounds like a wonderful companion and family member. Glad you had so many good years together. :)

A few blooms are sprouting here and there- but I imagine in a few weeks there will be much more to see!

Happy to hear that writing is going well! Yay!

Carol Kilgore said…
Jess - I appreciate your kind words. Wrangler was so attuned to all of us, especially me. He knew what I was going to do before I did it most of the time. I pray we all stay healthy through this crisis.
March 21, 2020 at 2:09 PM