Skip to main content
Labels
Posted by Carol Kilgore May 06, 2019

I'm no photographer, but...

UPDATE: Below, I said I will be back here on Monday, June 3. At that time, I didn't know I was going to be doing something fun and important In Real Life at that time. So I'll be back here instead on Wednesday, June 5. See you then!

I was at a loss as to what to write about this month. My life has been really busy all year, and finding quality writing time has been difficult. Even so, I've started drafting a new book. It's still in the early chapters, but I think it's going to work out. Fingers crossed!

So this month, I decided to share some photos. Just some random shots I took on my phone. All are from this year. There's no theme, unless it's that it reflects my year by jumping from one thing to another.

The coaster on my desk. Works equally well for coffee, water, and wine!
Purchased at Bed, Bath and Beyond. 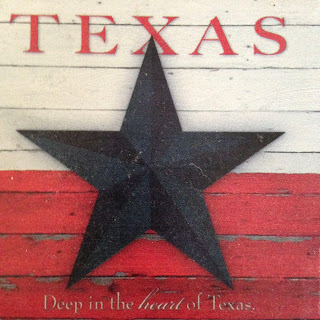 Peach blossoms on a baby peach tree. I'm hoping for yummy peaches in the summer. 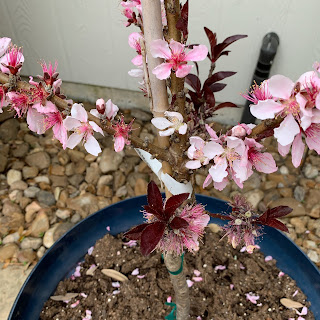 My pitcher collection. From left to right: Polish pottery, Italian pottery, handblown glass from Colorado, and back to Italy again - probably a different region, but I don't know. 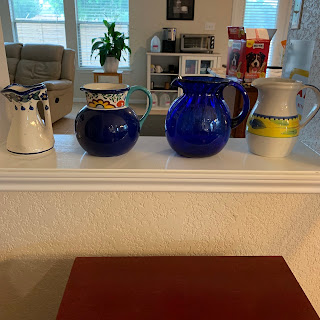 A new plant like some we purchased last year. It's called Confetti, and I think it's a variety of lantana. As long as it likes growing here, I don't care. 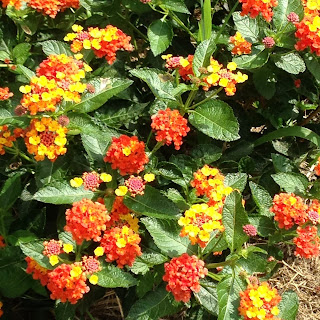 Wrangler napping. He's 14, so he deserves as many as he wants. 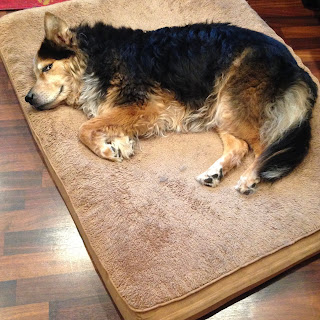 Shiner napping. Works hard. Plays hard. Sleeps hard. He's a real piece of work, so I deserve as many naps as he wants! 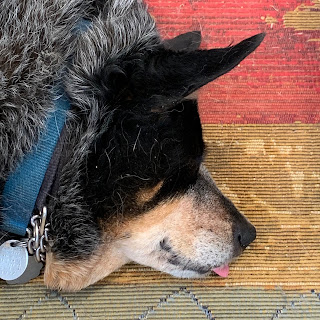 My knight in rusty armor. A favorite flea find. 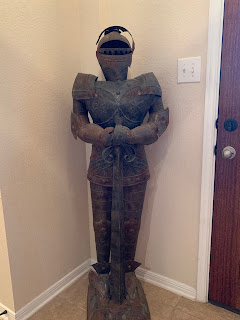 The Kindle edition of In Name Only will be on sale for 99 cents from Monday, May 13 through midnight May 20.

All Summer Newcombe wants is a home. A real home that she can live in forever and never again have to run for her life. After she met sexy firefighter Gabe Duran on one of her first nights on Padre Island, she hoped her dream home was right there. Even though the WitSec marshals were already talking about moving her, Summer was ready to stay and fight for her future.

I'll be back here on Monday, June 3. Until then, please try to stay out of trouble. That will be easier for some of you than others, I'm sure :)

Alex J. Cavanaugh said…
The armor is really cool. Bet that would startle someone in the middle of the night.
May 6, 2019 at 6:02 AM

Murees Dupè said…
Wow, that armor is stunning, and very cool. You definitely take some nice photos. I love the shots of your fur babies.
May 6, 2019 at 10:31 AM

Karen Jones Gowen said…
I don't know dogs sleeping are such a calming sight but they are. Maybe that's why the expression "let sleeping dogs lie"... Love your pottery collection!
May 6, 2019 at 12:32 PM

Elephant's Child said…
Lantana is classed as an invasive weed and banned here. That one is super pretty.
Love your tuckered out pooches - how I yearn to be able to relax like that.
May 6, 2019 at 3:11 PM

Arlee Bird said…
I'd like to find some nice flowers that would like to grow in my backyard. Ones that I don't have to water or tend to. Actually that sounds kind of like weeds.

Arlee Bird
Tossing It Out

Carol Kilgore said…
Alex - I think it would, too :)

Diane - I think it's an annual, but it works like a perennial here. Our winters are not usually long and cold. I just looked it up. It's both, depending on climate and what zone you're in.

Karen - Maybe so. They are sweet but are a handful. Especially together. Like two toddlers all day every day. I ♥ my pitchers :)

Arlee - I don't know what climate zone you're in. Here, if the location is mostly hot, dry, and sunny the best things are lantana, vinca, portulaca, and Pride of Barbados.

Mason Canyon said…
Great photos. Love seeing the dogs and that suit of armor looks like it has a story or two to tell. Have a great month and good luck with the new book.
May 6, 2019 at 5:39 PM

Jemi Fraser said…
Very cool! Your dogs are awesome and cuddly looking! :)
We finally have our spring flowers popping up!
May 6, 2019 at 5:45 PM

Natalie Aguirre said…
That's great that you're starting a new book even though life is busy. Thanks for sharing all the pictures.
May 6, 2019 at 7:49 PM

Carol Kilgore said…
Mason - Thanks! I'd love to know the backstory, too.

Jemi - The 'meanest' dog is the cuddliest one, LOL. I know how much you're enjoying the flowers :)

Congrats for starting another book! (A real glutton for punishment, eh? HA!)

Carol Kilgore said…
Teresa - I'd tell them you think they're awesomer, but then it would go to their heads and they'd be even more spoiled than they are now.
May 15, 2019 at 5:19 PM