March winds and April showers
Bring May with pretty flowers.

Except in Texas. Our state flower, the bluebonnet, blooms in March and early April, depending on where in the state they are, the local temperature, and how much rain fell there during the winter. They carpet pastures and roadsides as far as the eye can see. The view is breathtaking. 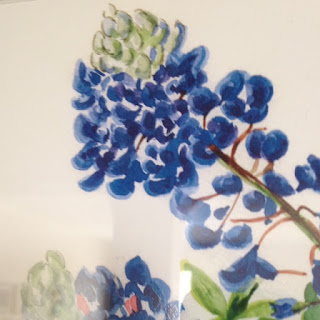 I don't have a photo to share, only this image from a watercolor hanging on my wall, but if you Google "Texas bluebonnets" and click on Images, you'll see what I mean. Just know that they're even more spectacular in person.

March is also the month we celebrate Texas Independence Day. March 2, to be exact. It's the day the Republic of Texas declared its independence from Mexico back in 1836. We were our own country until we joined the U.S. in 1845.

I looked up some fun facts about Texas to share. Some I knew, some not.

Texas is the only state to enter the U.S. by treaty rather than by some form of annexation.

The largest county in the state is in southwestern Texas and it covers 6,192 square miles. That's about the size of Connecticut. Brewster County's total human population is a whopping 9,145, give or take a few souls. Everyone has plenty of elbow room, for sure, but the county probably has more jackrabbits and rattlesnakes than people.

Texas has its own power grid.

We're a little extreme - at least when it comes to temperature. On March 27, 1984, Amarillo was 35F with snow. On that same date, same year, Brownsville's high temp was 106F.

Texas produces more wool than any other state in the union.

The Texas cattle population is estimated to be approximately 16 million.

Y'all will just have to visit Texas and see for yourselves. One word of warning - don't visit in the summer, unless you're tough enough to handle the Texas heat. It isn't always brutal, but when it is, you'll head for the nearest air conditioning as quick as your legs can get you there.

On another note...
Solomon's Compass will be on sale for 99 cents March 19-25.
Please share this news with your friends. 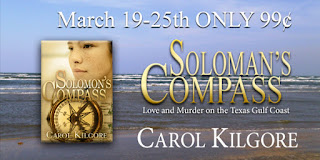 I'll be back here on Monday, April 2. See you then!

Natalie Aguirre said…
I've been going to Dallas to visit my in-laws for over 30 years. My late husband used to think of Texas as a country when I first met him. I'm sure you can relate to that level of Texas pride.
March 5, 2018 at 6:08 AM

Elephant's Child said…
I would love to see fields of Texas bluebonnets. You can keep the heat though. All of it.
March 5, 2018 at 2:28 PM

cleemckenzie said…
Love blubonnets! I brought some seeds home with me from Texas and they sprouted one year in my CA garden. After that, they simply packed up and headed back home.
March 5, 2018 at 4:17 PM

Carol Kilgore said…
Natalie - One of the Texas advertising slogans is/was "Texas, like a whole other country." So... yeah :)

Elizabeth - Exactly! Some I can understand. Gruene, for example, was named after an original German settler. Others, I'd love to know the story behind the story.

EC - They are so beautiful. I wish you could see them, too. It's not hot here when the bluebonnets bloom. Typically, March temps are 70s and 80s, but there are exceptions. Nothing at all like the summer heat.

CLee - They were homesick :)

Jan Christensen said…
It's always fun to learn more about Texas. I've only lived here 40 years this year, so I still have a lot to learn.:)I notice you missed the town of Climax, TX. Well, it's rather small.
March 5, 2018 at 7:53 PM

Jo-Anne's Ramblings said…
Never been to Texas and since I live down under I will never go there
March 6, 2018 at 3:51 PM

Carol Kilgore said…
Jan - Only 40 years :) I've never heard of Climax, Texas before. Now I have. Too bad it's small, LOL!

Jo-Anne - If I ever win a big lottery prize, I'm going to visit Australia. And I'll send you on a trip to Texas.

Julie Flanders said…
Geez, it's amazing to think of all those states fitting in Texas. Can't really imagine it!
I would love to see the bluebonnets. Their color alone is so beautiful. What a gorgeous shade of blue. <3
March 7, 2018 at 8:05 AM

Michelle Wallace said…
Such pretty flowers!
(WALKS-ah-HATCH-ee) love the pronunciation!
Texas is the only state to enter the U.S. by treaty... that sets y'all apart from the rest!

Susan Flett Swiderski said…
Interesting stuff. We have our share of heat here in Georgia, too, but I think you guys have us beat. But some of our town names would give you a run for your money. Like Shake Rag.

The bluebonnets are starting to bloom in our yard. They aren't very tall this year due to the lack of rain, but at least we have some.
March 8, 2018 at 5:53 AM

Carol Kilgore said…
Lynda - How cool you've been here. I hope you were able to visit more than one area. We're quite diverse.

Bish - I totally forgot about Leaky, otherwise I would've included it. Probably missed some more, too :) I'm totally jealous. How do you have bluebonnets before we do?
March 8, 2018 at 4:58 PM

DMS said…
I have never been to Texas- but would love to see the bluebonnets blooming for sure. Sounds beautiful! I learned a lot about Texas from your facts. :) Thanks for sharing!
~Jess
March 10, 2018 at 2:44 PM

BusinessFirstFamily.com said…
The sheer size of Texas blows my mind. Property in Texas must be absolutely beautiful. It's probably a great place to starting a courier company. I don't know if I'm tough enough to visit Texas in the summer. I'm usually attached to the A/C.
March 20, 2018 at 10:40 AM