Skip to main content
Labels
Posted by Carol Kilgore May 12, 2014


Are some of you thinking I've lost my mind? You may be right!

Last week, either Blogger or I messed up. Monday evening I noticed this entry was posted beneath last week's entry. I was pretty sure I didn't have last week's date on it, but there it was. And then I tried to get rid of it. That was a chore in itself. It was the post that wouldn't die. It even had four comments, which I ignored - because I wanted you to read it again this week.

However, I just previewed the post and guess what? Those comments are still there! The only post ever with comments dated before the date of the post!

So my apologies to Lynn and to the pre-post commenters.

This week we have a guest who's visited at the Tiki Hut before. She may write about cowboys, but I think she has a thing for that cabana boy with the tiki tat on his calf. And I think it's mutual. He was asking about her the other day, but I didn't tell him she was going to be here today. Boy is he going to be surprised :)

I guess the answer to that question could be, Why not?

Hi, I’m Lynn Cahoon, and I write The Bull Rider’s series for Crimson Romance.  My love of cowboys started real, real young.  I grew up in Idaho. Now some of you may not think of Idaho when you’re thinking cowboys. Montana and Texas get all the cowboy press.  But Idaho is filled with pickup driving, Wrangler wearing, boot stomping hot guys. When they put the cowboy hat on their head, it turns the boy next door into something else. Someone  else.

The Snake River Stampede is the biggest event that happens in my home town. When I was a kid, the Stampede had a parade every night of the rodeo.  Not a floats and tissue paper kind of parade, but a horse parade. Riding clubs from towns all over came to ride and support the rodeo.

The queen contestants always wore silk and sequins, and bright colors from their cowboy hat to their boots.  Give the girly girls princess gowns. I wanted a pair of bright purple skin tight pants, a shiny silver and purple top and a hat to match.  Even now, I’m drawn to a pair of pretty boots.  Last time I was in Nashville, I found a pair of knee high calf skin embroidered kicks that I would have died for.  But the practical side told me any pair of boots that cost more than my house payment were out of my reach. For now.

Riding horses, working on the ranch/farm, growing a garden, all these activities bring back memories of home to me. Writing The Bull Rider’s series, I was transported back to Idaho. Back to a time where a young girl’s imagination ran free.

The Bull Rider’s Keeper is the last (planned) book in the series.  The four friends from Shawnee end the story almost exactly where they started.  Except everything and everyone is the same but different. Just like going home.

So are you a cowboy fan? Or do your tastes in fictional heroes run to the suit variety?

Lynn Cahoon’s a multi-published author. An Idaho native, her stories focus around the depth and experience of small town life and love. Lynn’s published in Chicken Soup anthologies, explored controversial stories for the confessional magazines, short stories in Women’s World, and contemporary romantic fiction. Currently, she’s living in a small historic town on the banks of the Mississippi river where her imagination tends to wander. She lives with her husband and four fur babies. 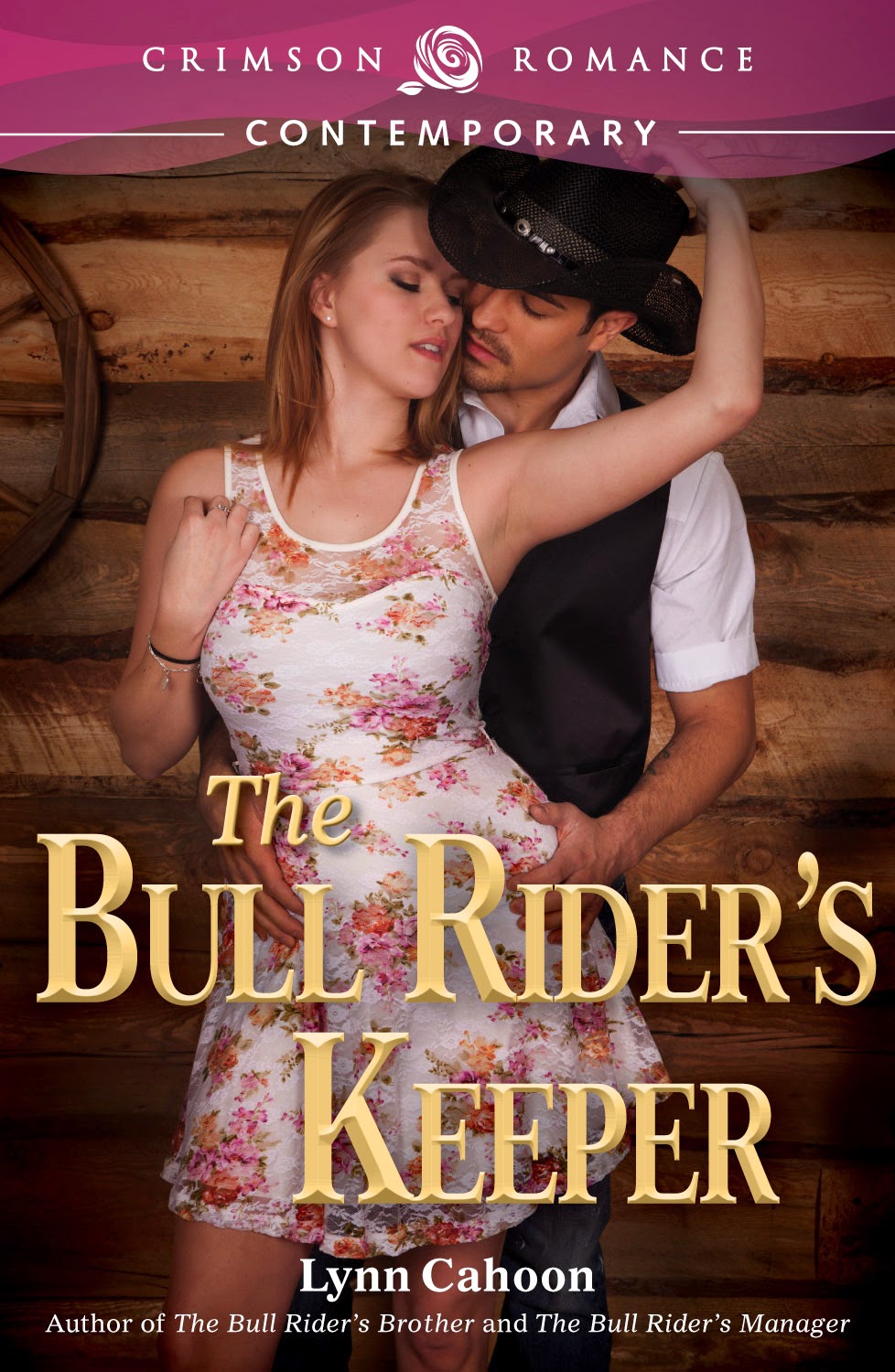 Jesse Sullivan isn’t afraid of any thing, any man, or any bull. But when he decides to take a chance and carve out a life outside his rodeo career, he’s feeling like he’s walking on shaky ground. In typical Jesse style, he jumps at a chance to purchase Main Street Gallery, a Boise tradition in the art world.

Taylor DeMarco has two goals for the next year. Getting the gallery on sound financial ground to prove to her parents that she can keep her grandfather's legacy alive is the first one. Moving out of the house and into her own condo by the Boise river, is the second. When she finds her folks are selling the gallery to Jesse, she vows to stop the sale, no hands barred.

When sparks fly between Jesse and Taylor, family gets in the way of reason, and they have to decide what is more important, their desires or keeping Main Street Gallery open and successful.

Mason Canyon said…
Lynn, I agree with you - why not cowboys. There's just something about cowboys from draws you in. The Bull Rider's Keeper sounds like a fun read. Wishing you much success.

Optimistic Existentialist said…
Congrats Lynn!! Nice to meet you. Thank you Carol as always for introducing us to amazing bloggers :)
May 5, 2014 at 12:13 PM

Elephant's Child said…
Congratulations Lynn. Cowboys are completely alien to my experience - but indeed, why not. You can keep the boots though - way too enclosed for me.
May 5, 2014 at 2:23 PM

Jan Hougland said…
Thanks to The Tiki Hut and Carol Kilgore for this last post on your tour, Lynn. I'm glad to have been introduced to a new author in the romantic suspense line...gotta check Ms. Kilgore's books out now. :-) As to your westerns, Lynn, I thank you for your writing and this tour. Keep on writin' 'bout them cowboys! jdh2690@gmail.com
May 12, 2014 at 9:44 AM

cleemckenzie said…
I'm so glad I'm not the only one to mess up posts. I did that last week. I'm blaming it on my A to Z brain and having my post out of alphabetical order.

VR Barkowski said…
I grew up in the West surrounded cowboys both real and drugstore, country music, rodeos, and a father addicted to westerns. So of course I'm more attracted to suits. As we all know, the grass is always greener… etc. etc. ;)

Best of luck with The Bull Rider's Keeper, Lynn. Sounds like a very fun read!

Carol Kilgore said…
Janice - Thanks for stopping by and commenting. Much appreciated. I hope you will try one of my books!

Lee - Maybe we can totally blame it on Blogger??? Probably not, LOL.

Lynn Cahoon said…
I'm checking in on my break from the day job - yes, even writers have to work for a living. :) Mason - Glad you love cowboys too!

Melissa - seriously, there are some definite advantages of Idaho cowboys. :)

Elephant - I do love my boots. But I'm also a flip flop girl. LOL

Emily R. King said…
I love a good cowboy! I think it would be fun to spend some time working on a ranch. Though the days are long, it seems to be satisfying hard work.
May 12, 2014 at 4:58 PM

Helena said…
Of course there are cowboys in Idaho! And if they look like the one on the cover of Bull Rider's then I'm hooked. I really enjoy books that have a strong sense of place, so I 'll check this one out.
May 12, 2014 at 11:04 PM

Carol Kilgore said…
It appears Cowboy Mania has arrived at the Tiki Hut :)

Jennifer - I think the lure of the cowboy is his strong silent nature.

Carol - They will be wearing their boots, even on the beach.

Susan Flett Swiderski said…
I don't have any real-life experience with cowboys, but I sure had my share of crushes on TV and movie cowboys when I was young, so I reckon I MUST like 'em...

Nice to meet you.

mshatch said…
I had the exact thing happen to me, Carol and when I re-posted there were all the comments - ack!

Congrats to Lynn and her book. I have always wanted to live somewhere like Idaho--I am all for the western life and traditions.
May 13, 2014 at 10:02 PM

Crystal Collier said…
I suppose because I grew up so close to the culture but in a "city," I'm a little sensitive about the whole cowboy stigma. Grandpa was a rancher and real cowboy, but Mom left the country behind when she got married, and Dad came from a prestigious line of doctors... I can see how a cowboy could be considered attractive, but I'm stuck in my own social trap.
May 14, 2014 at 3:35 PM

Apawlogies for my late arrival to your blog. I blame it on having the hectic life of a celebrity dog :)

Lynn's, "The Bull Rider's Keeper", book certainly reminds me of the times I was a rancher dawg in British Columbia.

Cowboys are neat. Although cowboy in Britain has a rather negative meaning in regards to the building industry.

All the best, sorry, best.

Lynn Cahoon said…
Susan, there were a lot of hot cowboys during my growing up years. I guess I got the habit early. :)

Medeia - Book boyfriends are the best. And less work.

Lexa - I love going to a rodeo. Fun in the sun.

Slamdunk - Idaho is beautiful and a great place to live.

Crystal - I grew up wanting to live in the big city rather than on the farm.

Hi Penny - we had a lot of ranch dogs. One tore the door off the barn when the thunder storm came. Do you have that problem?

Empty Nest Insider said…
Howdy Carol and Lynn! I also fell in love with cowboys on the big screen, and on TV. I still love watching reruns of Bonanza! Wishing you much success, Lynn!

Sorry it took me so long to get back to your comment on my IWSG post. I just wanted to say thank you so much for your kind words. You touched me and put a smile on my face. And I love the sound and look of this book! Might have to extend my reading list :D
May 16, 2014 at 1:50 PM

Tina said…
I have nothing against cowboys, but my type is the reformed bad boy. In my particular case, turned electrical engineer. Great combo...hubba hubba. Love the premise of this book and wish your friend all the best with her new novel.
Tina @ Life is Good
On the Open Road! @ Join us for the 4th Annual Post-Challenge Road Trip!
May 17, 2014 at 6:10 PM

Anonymous said…
Good on you for getting the word out, Carol. Add a werewolf or chupacabra to this western romance, and I'm in.
May 18, 2014 at 8:50 AM

Carol Kilgore said…
Lynn and Lynda - Your comments just showed up in my moderation folder either yesterday or today. I didn't check it yesterday.
May 25, 2014 at 6:07 PM