A Little Something For You

So I'm officially on a blog break. Or as the purr-fectly awesome Austin Towers said, a writing break! I like that :)

And I hope I'm actually writing when you read this!

This is a short story I wrote for the January 6, 2010, Texas Gardener’s Seeds, a weekly newsletter for Texas gardeners.

Lily awoke to her favorite kind of day — cold and sunny. She stretched until her muscles loosened, then jumped from the bed to the floor.

After breakfast, she used her cat door to go to the garden instead of waking Kyle. He needed rest after coming home late the previous night. When she was a kitten, he'd rescued her from a trash bin, so she did her best to look after him.

She picked her way through the damp grass, avoiding the shady spots where frost still clung to the slender blades, straight to the pansies lifting their faces to the morning sun. Lily loved pansies more than anything in the world. Except maybe catnip. Just the thought of catnip made her purr.

Kyle had planted both especially for her, and she'd shown him the spots to plant them —  the pansies on the hill under the crabapple tree so they received plenty of sun yet kept their feet dry after a rain, and the catnip behind the gardening shed that shaded the tender herb from the hot afternoon sun. In the shed's shelter she could munch and roll in the catnip to her heart's content without being seen. The catnip was gone now but would return in the spring before the pansies succumbed to the hot Texas sun. It was the best of both worlds — catnip in spring, summer and fall, and pansies in winter and spring.

Lily had learned a lot in her lives, but this one was number nine. Since the beginning, she'd intended to make the most of this last life. Several years ago she made a list of nine things to accomplish. The first seven hadn't been too difficult:
1. Find a Trustworthy Human
2. Learn to Play Ball with All Paws
3. Get Rid of Hairballs Before They're a Problem
4. Find One New Nap Spot Every Day
5. Don't Meow While Kyle is on the Phone
6. Stay Out of the Bathroom While Kyle is There
7. Limit Catnip to Once a Day
Limiting catnip had been harder than she'd thought. And out of all her nap spots, her favorite was still curled on Kyle's placemat in the afternoon sunshine.

She reached the pansies, closed her eyes, and inhaled. Their scent reminded her of springtime — earthy, with the aromas of sunshine and wind and rain all mixed together. She sighed and sampled the perfume again. And couldn't resist munching an orange one to top off breakfast. 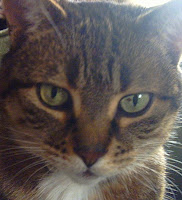 Spicy. She bounded to the bird bath for a drink. Before she sipped, she gazed at her reflection. The clear water showed her perfect black and gray tabby markings, her silky ears. She slowly blinked her bright green eyes in approval.

Back among the pansies, she cleansed her paws and whiskers while watching a cardinal flit across the yard. She would've given him a run for his tail feathers if she hadn't just washed. Instead, she gave him a deep, throaty mew, letting him know she'd decided he could escape. Her thoughts returned to her list, so she closed her eyes to concentrate.

While the first items on her list were marked off or made into good habits, the remaining two had given her cause for concern:
8. Don’t Scratch Furniture
This was more difficult than limiting her use of catnip. Kyle had beautiful things, and he enjoyed them. She tried hard not to scratch, but sometimes she couldn't help herself. So she found the back corner of an old settee Kyle had moved into the guest room. No one would ever notice. Would she ever be able to break this habit?

She had one more thing to do before Kyle awoke. She stretched again, chose two purple pansies, and carried them inside. 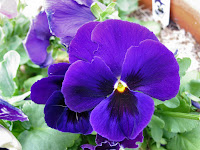 It was an old cat tale, but time to try it. She gently placed one purple pansy on each of Kyle's eyelids. Then she sat next to him, wrapped her tail around her feet, and purred.

Within seconds he stirred, removed the pansies, and opened his eyes. He smiled at her. "Morning, Lily. You're full of surprises. They're beautiful."

She purred louder and slowly blinked her bright green eyes in appreciation.

He ruffled her fur. "I gotta jump in the shower."

The pansies lay at her feet. It was time for the ninth item on her list.

She headed back out her cat door to the bare catnip spot behind the gardening shed to eat the two purple pansies she'd brought with her. Then she smiled and closed her eyes.

Cat naps were wonderful. She stretched her muscles and strolled to the front of the house, taking in her surroundings.

Kyle opened the door to the woman standing on the porch. "Yes?"

"We met the other day, do you remember? You gave me your card when you showed me which food to buy for my new kitten." Her voice was deep and throaty.

Kyle looked at her as if he wasn't sure. "You look familiar."

"You were on the phone. Mostly you pointed and motioned. Would you like to join me for a run?"

He smiled. "Sure. Come in while I get my shoes. What's your kitten's name?"

"Pansie. She's a calico with the cutest little orange face."

When Kyle entered his bedroom, she sped to the guest room, pulled out the settee, and ran her nails along the far corner. It felt so good.

Just as quick, she pushed it back into place, checked her reflection in the mirror, and hurried back to the front door before Kyle returned.

She turned her head toward the pansies, slowly blinked her bright green eyes, and purred softly, remembering the old cat tale:

Purple pansies on his lids
When he sees you,
You'll be his.

See you on September 23 with You-Know-Who!

Optimistic Existentialist said…
Enjoy your blogging break Carol! We shall see you upon your return :)
August 19, 2013 at 9:25 AM

cleemckenzie said…
A great way to start my day! A lovely cat story.

~Sia McKye~ said…
What a nice story with a nice twist! Have fun wrestling with your new characters. :-)

Elephant's Child said…
Thank you for this very generous gift. I hope your writing is both productive and satisfying. And am sure it will be.
August 19, 2013 at 9:39 PM

My cat leaves my furniture alone because I gave her an old padded armchair of her own. It's in godawful shape from all the scratching, but it makes her happy.

Anonymous said…
I loved your story. You write so beautifully, Carol. I look forward to seeing you back here at your blog the last of September.
August 20, 2013 at 7:10 AM

Crystal Collier said…
Oh, I love it! That ending is awesome. I used to read cat stories like a maniac--alas, it's been a few years.

Unknown said…
I like this story! Bright Lily. Thanks for sharing it. All the good bloggers are going on break. Happy writing.
September 11, 2013 at 8:30 PM