Thanks so much for stopping by for the Official Cover Reveal for my second novel - SOLOMON'S COMPASS. Without further ado: 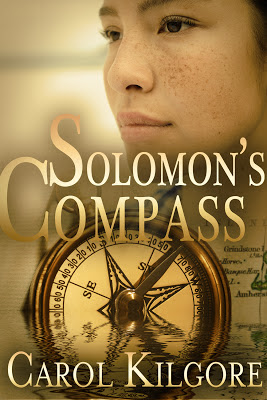 Taylor is on a quest to unearth her uncle’s buried treasure—a journey so far out of the realm of her real life she can barely fathom it. There’s one other minor glitch. Taylor's certain the buried treasure was all in Uncle Randy's dementia-riddled mind. Now he’s dead.

All the same, Taylor is in Rock Harbor, Texas, to settle her uncle's estate, including following his directions to the treasure—even if doing so means trespassing. When someone tries to kill her, Taylor's quest becomes personal. She tosses Randy's official cause of death—Drowning Due to Accident—out the window and starts looking at his Rock Harbor acquaintances. Could Randy's treasure be real?

Jake Solomon is in Rock Harbor under false pretenses. He loathes the charade, but if he doesn't follow the plan, his dad will make Jake's SEAL training feel like a day on the monkey bars in kindergarten.

The plan is to protect Taylor Campbell from the fate that befell her uncle and the other members of a tight circle of Coast Guardsmen called the Compass Points who served together on Point boats in Vietnam.

Due to the danger involved, Jake’s dad has ordered him not to become involved with Taylor. Disobeying his father was Jake’s first mistake.

Taylor is attracted to Jake as well, but she refuses to wait for Jake to locate the killer when she knows her plan will force her uncle’s murderer into action.

But the killer's actions are just what Jake is afraid of.


Thanks to everyone who is participating today in the cover reveal for SOLOMON'S COMPASS. I appreciate each of you more than words can express. Let me know whenever I can help YOU in any way. I'm happy to support you, too.

Since many of you are hopefully seeing information about SOLOMON'S COMPASS all around blogland today, I thought I'd offer you a little more here.

Back in November, three different blogger-writers tagged me for The Next Big Thing meme. The other bloggers are Jennifer Shirk, VR Barkowski, and Jan Christensen.

I declined at that time, but with their permissions, want to incorporate those meme questions into whetting your appetite for SOLOMON'S COMPASS. So I'm going to answer some of the questions here. I'll go into more depth on the others in the coming few weeks.

What is the title of your book?
SOLOMON'S COMPASS

What genre does your book fall under?
Crime Fiction with a Kiss - Mystery/Suspense/Romance

Which actors would you choose to play your characters if it were a movie?
This was harder for me than it should have been because I don't know of any actor who fills the bill 100% for either character the way I envision them. The answer will probably be different for each reader. So I picked two options for each.
Taylor Campbell - Renee Zellweger or Hilary Swank
Jake Solomon - Hugh Jackman or Michael Fassbender

What is the one-sentence synopsis of your book?
When U.S. Coast Guard Commander Taylor Campbell discovers her uncle’s drowning death was murder, she must determine the killer’s identity in order to prevent another murder; it's Jake Solomon's job to ensure Taylor Campbell isn't the next victim.

Next Monday, I'll answer another question or two. These were the easy ones :)

Tomorrow - Tuesday, January 8 - I rounded up every smidgen of courage I possess and agreed to visit Mistress Snark on Laura Eno's blog. Pray I return fit to prepare next Monday's blog post.

Laura Eno said…
I love the cover and can't wait to read the book!

Alex - Thanks. I'm making my way around to everyone.

Jennifer - I'm excited, too. And for your blog tour starting today!

Linda G - Well, I fell a tiny bit in love with Jake Solomon myself :)

Dezmond - We each follow our own rules and guidelines.

Maria Zannini said…
Congrats, Carol! I'm seeing your cover everywhere today, but I wanted to offer my congrats to you in person.

Susan Flett Swiderski said…
Looks like your cover is making a big splash in the bloggie waters today. Congratulations! Let's hope the actual release creates a tsunami. (Um, you know what I mean...)
January 7, 2013 at 10:40 AM

Suzanne Furness said…
Many congratulations, Carol. The cover is looking fab around the blogosphere today :)
January 7, 2013 at 10:42 AM

LR said…
I meant to sign up for your cover reveal but I was too late. I'm sorry about that.

But I'll certainly spread the word and I truly look forward to reading it. :)

Anonymous said…
Hugh Jackman is a good pick for the MC. I've liked most of Renee Zellweger's stuff. Best wishes with everything!
January 7, 2013 at 11:12 AM

Manzanita said…
Carol,
I do so appreciate people who write books and tell stories. Especially mystery stories, I think I've mentioned that before. Your cover will be magnetic on the book stands. I didn't know Hugh J. could sing until I saw Les M. Your movie could be a musical. Ha
Love and peace and big congratulations
January 7, 2013 at 11:59 AM

LD Masterson said…
Congratulations, Carol. I've been seeing your beautiful cover all around the blog circuit today.
January 7, 2013 at 12:07 PM

Luanne G. Smith said…
Yay!! Your cover has blanketed the blogosphere today. Such a well done cover. Really turned out beautiful, and with a fun story to go with it. Congrats!!!
January 7, 2013 at 12:14 PM

Carol Kilgore said…
Delores - Keep your fingers crossed for that :)

Laura - Uh-oh. Tell her she won't get the book if she captures me :)

Maria - Thanks, Maria. And for the good luck wishes, too!

Helena said…
It's a gorgeous cover and a very intriguing story, Carol. Congratulations on yet another big milestone!
January 7, 2013 at 1:14 PM

Jemi Fraser said…
Love the cover - and love seeing you everywhere in the bloggy-verse today!
January 7, 2013 at 3:08 PM

Just Wendy said…
You should be mighty proud of yourself!

Anonymous said…
I love the cover. Sounds like a good book, I love stories about hidden treasures.
January 7, 2013 at 4:21 PM

Carol Kilgore said…
LR - Spreading the word is what it's all about. So thank you. I'm glad you like the cover :)

Stephen - As if I'll ever need to worry about that, LOL!

Johanna - Thanks for telling me :) At first I though it was sort of like Jane Austen and Zombies in that it didn't fit. But somehow it does, and I don't know any other way to describe what I write. Yay for smiles!

Manzanita - So happy you like the cover! I'll tell you, if anyone could pull off breaking into song in the middle of breaking a leg, it would be Jake Solomon. That man mezmerized me the moment he walked onto the page way before he was supposed to.

Carol Kilgore said…
Luanne - Thanks! Glad you like it.

Patricia Stoltey said…
Congratulations, Carol. I sure hope you're going to contact me to do a guest post for my blog in April. I love featuring debut novelists.
January 7, 2013 at 8:35 PM

Carol Kilgore said…
Wendy - I'm glad you like the cover. I'm hope readers will like the story.

Janet - Thanks. I hope you'll enjoy the story, too.

Christine - It's been a fun day!

Cherie - Thanks. The designer did a great job!

Jan Christensen said…
I can tell the big reveal is going really well from all the comments here. I know how hard you work and how much you deserve all this excitement about your next book. The cover is a stunner, and I can't wait to get a final copy of the manuscript. And, BTW, thanks for the mention/link in your post. You rock!
January 7, 2013 at 10:00 PM

Carol Kilgore said…
Patricia - I'll be in touch later this week or next. Thank you!

Nas - I just love it, and I'm so glad everyone else seems to love it, too.

Unknown said…
What an incredible cover! Congratulations, Carol! The narrative sounds amazing and riveting, as well. Can't wait til its release! I feel so inspired now... :)
January 7, 2013 at 10:44 PM

Empty Nest Insider said…
Congrats on another fabulous cover Carol! The story sounds wonderful, and I like your choice of lead characters.
Julie
January 8, 2013 at 2:07 AM

Carol Kilgore said…
Raquel - Glad you like the look and feel of it.

Carol Kilgore said…
Jessica - I'm just finishing up getting around to everyone. BTW, Mistress Snark is one tough cookie - Chocolate Chip Cookie, I think :)
January 8, 2013 at 1:46 PM

Carol Kilgore said…
Hi, Jo-Anne, and welcome to the Tiki Hut! I'm so glad Tracy Jo sent you over, and I hope you'll be back. And thanks for your interest in Solomon's Compass :)

Michelle Wallace said…
Carol, I love the cover picture... it has a timeless appeal...
Congratulations!!