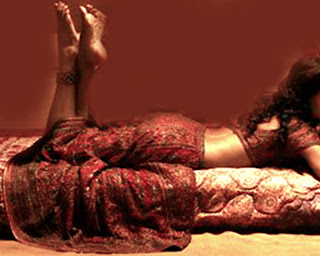 You know what I’ve yearned for my entire life? Exactly this. A blanket on the sand under me, endless ocean in front of me, and not a soul in sight except that gorgeous, shirtless creature wielding a hammer as if he were the Norse god, Thor himself. Sigh. I could watch him forever, chiseling and slamming all that raw wood together to build a tikihut just for me. I’ve been a little homesick lately. It’s Diwali, the biggest Indian Holiday and I’ve been craving all things Diwali—firecrackers and oil lamps and ghee-soaked sweets. All this black and orange Halloween spookiness has only made things worse.
So my darling husband’s building me a tikihut here in Malibu, just like the one on our terrace in Mumbai overlooking the Arabian Sea. And while the startling turquoise stretched out in front of me isn’t quite the dusty gray-blue of the waves back home, I think I might be able to handle it.

And right about now, who’s watching the water anyway? It’s a toss-up between his glorious behind as he bends over to lift up the thatched canopy, and his undulating pecs as he raises it over the frame. The way those low slung board shorts are molding him, it’s a miracle I can pull my gaze away long enough to take in the sunlight dancing across his sweat-slick shoulders. He pulls back the hammer and rams it into the nail he’s holding.

Suddenly he yells, the hammer flies out of his hand and he doubles over. I jump up and run to him, clutching my own thumb as if he’s just smashed it with a hammer.

He’s hopping around, emitting incoherent swearwords in staccato bursts. It reminds me of a yelping puppy, one with an impressive vocabulary. I chase him in circles, trying to reach for his hands, my heart slamming in my chest. Finally, he lets me pry his fingers apart. His face is scrunched up, his feet are dancing a little pain dance. Bloody hell! This is all my fault. Tears pool in my eyes as I pull his trembling fingers to my lips. He strokes his thumb across my mouth and whispers in my ear. “Can you suck on it to make it better?” His smile nudges my cheek.

I open my mouth and bite his stupid thumb with such force he repeats the entire drama over again. The hopping, the yelping. I shove him into the sand, fuming. He goes down with more grace than any lying jerk should ever be blessed with and props himself up on those Greek-god arms, grinning his little boy smile, the one that’s made my head spin for as long as I can remember.

The sun is shining into his face, setting everything on fire—the silver crystals of his eyes, his ebony hair, the diamond sand sparkling against his toasted olive body. He pulls me down against him.

“The next time you do that to me I’m going to kill you, I swear.” Last year he scared me half to death by pretending to be paralyzed just to make some sick point.

“You know you’re only mad because I’m the better actor, right?”

I dig my elbow into his ribs. “Tell that to me on the red carpet at the Filmfave awards next month.”

He smiles, and my anger melts in the warm pride glowing in his eyes.

“You know what? We haven’t celebrated that Best Actress nomination yet.” He wiggles his brows at me.

I wiggle mine right back. “I know just the place,” I say and lead him to our tikihut.

Sonali Dev’s first attempt at writing came when her mother caught her writing couplets about her first grade math textbook instead of doing her homework. It took her years to figure out that wanting to write down every thought that popped into her head probably meant she was a writer. Five years in architecture school with professors yelling “sketches not words” finally got the point across and she embraced her mad love for words. A love she combines with her love for Bollywood to conjure up stories that make a crazy tangle with her life as wannabe supermom and domestic goddess, and disgruntled corporate minion. Sonali lives in Naperville, IL with her very patient and often amused husband and two children who demand both patience and humor, and of course her characters who can’t stop doing Bollywood dances inside her head.

Sonali's manuscript, Bollywood Bride, is currently under review by publishers. In it, Bollywood star Ria Parkar returns home to Chicago after ten years to escape a scandal in Mumbai and comes face-to-face with the man she betrayed for stardom. Vikram Jathar is no longer the smitten boy who chased Ria across the globe. But he's still the only man who can melt through her legendary reserve. He's also the one she's destined to destroy...
Chat with Sonali on Facebook:
http://www.facebook.com/SonaliDev.author

Anne Gallagher said…
What a fantastic post! I was right there with you watching your crazy husband smashing his finger!

Slamdunk said…
Well done Sonali, and appropriately warm as I face the cold reality of November in the Northeastern US.
November 2, 2011 at 8:07 AM

WannabU said…
Can't wait for the book to come out!! You brought the characters alive and left me yearning for more..
November 2, 2011 at 10:10 AM

Mason Canyon said…
WOW, what a post. BOLLYWOOD BRIDE sounds like an intriguing read. Wishing you much success with your writing, Sonali.

Carol, thanks for the introduction to a wonderful new author.

Mason
Thoughts in Progress
Freelance Editing By Mason
November 2, 2011 at 11:17 AM

Slamdunk, it's 70 in Chicago today, but cold reality is slinking our way too.

Robin, Lydia, Mary Jo, Mason, so glad you enjoyed it.

Elizabeth, me too! I'm so jealous of that Ria!

Savannah said…
My oh my, how I love to read about pecs!

One day, because of you, I must visit Mumbai!

So much fun! Bollywood Bride is going to be snapped up before you know and I'll be one of the first to be in the checkout line (or internet line!).

Carol Kilgore said…
Just dropping in to say hi to everyone. And welcome to those of you who are new here.

Also, congratulations to Elizabeth/Riley on her 11/1 release of Hickory Smoked Homicide.

Sonali Dev said…
Savannah, glad to give you your pec-fix! And one of these days you're coming to Mumbai with me.

Tracey, you are too kind. And I LOVE LOVE LOVE the cover of A Lady's Revenge.

Brenda, I love that you enjoyed it!

Anonymous said…
These tikihuts are getting steamier and steamier.

Jo said…
Very desctiptive and very beautiful that you're still so in love with your husband. Good luck with your book. Greetings. Jo (Kenya)
November 3, 2011 at 7:27 AM

Janet, said…
It's getting hot over here in the Tiki Hut! Great writing, good luck with your manuscript.
November 3, 2011 at 9:19 AM

Clarissa, he is quite the ham!

LR, oh you have to see it to believe it, it is glorious.

Jo, he is kinda hard not to love (what with the glorious behind and all :))

Kris, what would I do without you?